The Complete Guide to Automating Certbot using Docker, Nginx and Ubuntu on a Virtual Machine in the Cloud

19 June 2018: I updated the code and instructions to explain how the certbot renewal process. Specifically, I explain how to use certbot via a cron job to renew Let's Encrypt certificates and to automatically reload the Nginx configuration and certificates.

There's a convergence of different technologies that work together in order to dockerize Let's Encrypt with Ubuntu and Nginx. The reality is that it's quite simple to get up and running.

If you've been looking for an easy to read and follow guide that will allow you to dockerize Let's Encrypt on Ubuntu, you've come to the right place. Even if you're not interested in running Let's Encrypt in Docker, this post will still show you how to obtain free SSL/TLS certificates from Let's Encrypt as the certificate acquisition steps are the same.

I created a Youtube tutorial that shows how to use Docker and Let's Encrypt to issue free SSL certificates.

Before we continue, let's look at what I'll be covering in this post:

I registered a new domain name, ohhaithere.com for the purposes of this post and will be referring to that domain in all examples.

Running an Ubuntu Server 16.04 VM on AWS or Azure

I'm not going to cover how to set up a virtual machine on AWS or Azure, as that is a separate topic.

To get a VM up and running as a Web Server, at least for the purposes of this post, you need to ensure the following:

SSH into your server and run the following commands to install Docker on Ubuntu.

Docker Compose is used to orchestrate and run multiple containers together.

Get the latest version of Docker Compose and install it

As far as the server installation is concerned, that's really all there is to it. Spinning up a new Ubuntu instance and installing docker can literally be done in less than 5 minutes.

A Quick Overview of the Let's Encrypt Certificate Issuance Process

Before I proceed, it's important to step back and understand how the process works on a high level.

Let's Encrypt is an open, not for profit and free Certificate Authority (CA). This means that they issue free SSL/TLS certificates. In addition to this, they provide software that can issue the certificates and renew certificates automatically. The software that manages this process is called Certbot, and usually, you would install this on your server.

The process for obtaining a free Let's Encrypt certificate is a 3-part process:

This certificate consists of a private key and a public key and both these keys are saved in a Let's Encrypt folder on your server. Your web server, which is Nginx in this instance, loads both the private and public keys in order to configure SSL/TLS for your site.

The public key is not secure and is sent to every browser that makes a request to your site, while the private key is secure and is not shared with clients. I will cover the certificate issuance process in more detail in a subsequent post as it is an in-depth topic that requires a separate post.

The key point with regards to the SSL/TLS certificate is that it consists of 2 keys. Both keys are stored in a Let's Encrypt folder. Your Nginx configuration file needs to reference both keys in order to configure your site to use HTTPS.

The Certbot software gets updated with new releases often. If you install Certbot on your server, this would involve uninstalling and re-installing Certbot every time you need to update the Certbot agent, which makes it a perfect candidate to run in a Docker container. If Certbot is updated, a new image will automatically be pulled from the Docker registry the next time the agent runs in a docker container.

By dockerizing Certbot, the process for obtaining Let's Encrypt certificates will now only consist of 2 parts:

By running Certbot in a Docker container, we no longer need to be concerned with maintaining the Certbot agent software. If a new version is released, a new image will download and run the next time the Docker container instance launches. Simple and automated.

How to Dockerize Certbot

Before we can execute the Certbot command that installs a new certificate, we need to run a very basic instance of Nginx so that the domain ohhaithere.com is accessible over HTTP.

In order for Let's Encrypt to issue you a certificate, an ACME Challenge Request is performed:

This basic instance of Nginx will only ever be run for the first time that you request a certificate from Let's Encrypt. It's a basic instance because it doesn't even need to have a default page. It just needs to give write permissions to the Certbot agent so that it can place a token at an endpoint for the challenge request and that's all.

To recap, the very first request for a Let's Encrypt certificate will involve the following:

For all Let's Encrypt renewal requests, the process will involve the following:

On your server, create a new Directory:

Then, create a new docker-compose.yml file

The docker-compose.yml file does the following:

Then, create a configuration file for nginx

The nginx configuration file does the following:

Next, create an index.html file

Before running the Certbot command, spin up a Nginx container in Docker to ensure the temporary Nginx site is up and running

Then, open up a browser and visit the domain to ensure that the Docker container is up and running and accessible. As stated earlier, it's not necessary to have a default index.html page for this container, but it makes testing the container a lot easier, so I always create one. 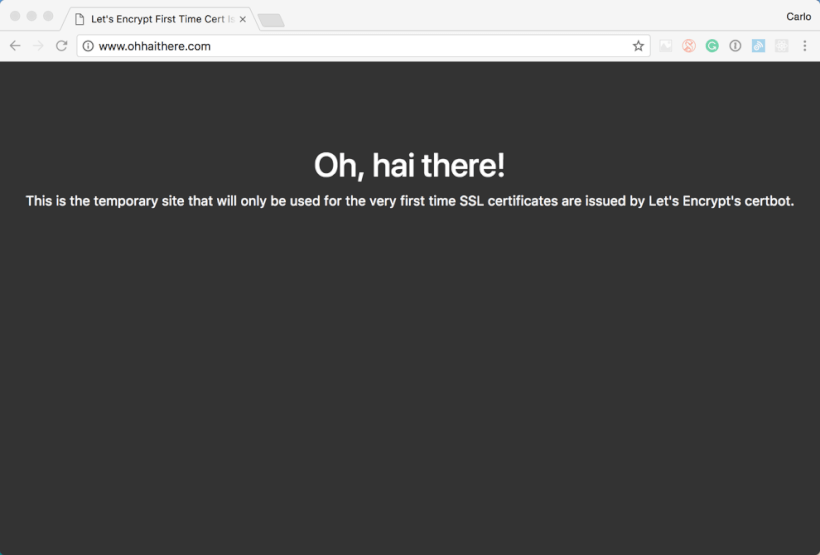 We're almost ready to execute the Certbot command. But before we do, you need to be aware that Let's Encrypt has rate limits. Most notably, there's a limit of 20 issued certificates per 7 days. So if you exceeded 20 requests and are having a problem with generating your certificate for whatever reason, you could run into trouble. Therefore, it's always wise to run your commands with a --staging parameter which will allow you to test if your commands will execute properly before running the actual commands.

Run the staging command for issuing a new certificate:

After executing the above command, you should get the following output which should indicate everything ran successfully.

The command does the following:

Get Additional Information with the Certbot Certificates Command

If the staging command executed successfully, execute the command to return a live certificate

And then request a production certificate: (note that it's a good idea to supply your email address so that Let's Encrypt can send expiry notifications)

If everything ran successfully, run a docker-compose down command to stop the temporary Nginx site 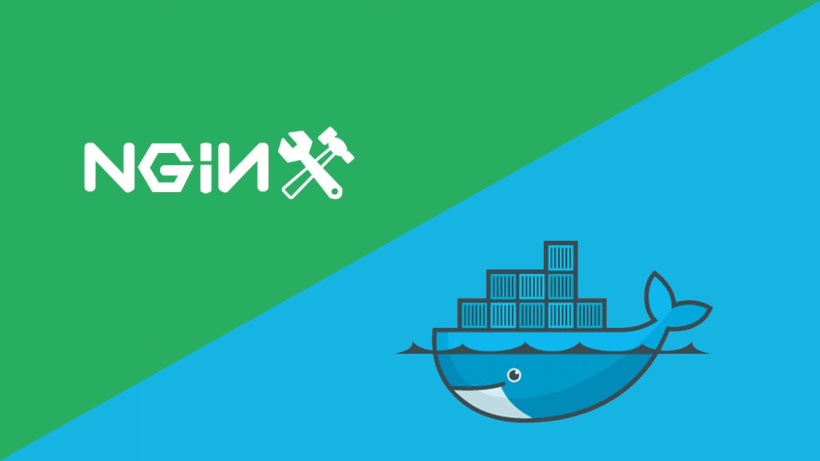 Create the directories for our production site

Let's start with the docker-compose.yml file

The docker-compose does the following:

Next, create the Nginx configuration file for the production site

Spin up the production site in a Docker container:

How to Renew Let's Encrypt SSL Certificates with Certbot and Docker

Earlier, we placed the following section in the production Nginx configuration file:

The production site's docker-compose file then maps a volume into the Nginx container that can be used for challenge requests:

This effectively allows Certbot to perform a challenge request. It's important to note that certbot challenge requests will be performed using port 80 over HTTP, so ensure that you enable port 80 for your production site.

All that's left to do is to set up a cron job that will execute a certbot command to renew Let's Encrypt SSL certificates.

It's a good idea to run a daily cron job that attempts to renew Let's Encrypt SSL certificates. It doesn't matter how many times this command is executed as nothing will happen unless your certificate is due for renewal.

To add a crontab, run the following commands:

Place the following at the end of the file, then close and save it.

Get an A+ Score on SSL Labs 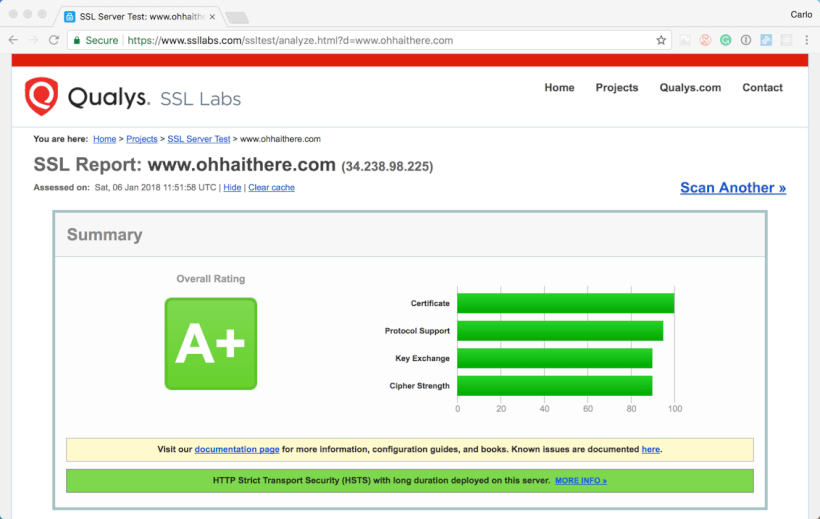 Get an A+ Rating on SSLLabs

Hardening Your Site's Security and How to Get an A rating on securityheaders.io

The last thing left to do is to harden the site's security and get an A rating on securityheaders.io

Get an A Score on securityheaders.io

There's certainly no doubt that HTTPS adoption has reached a tipping point. Let's Encrypt has had a huge hand to play in this by making free SSL/TLS certificates available to everyone, while Google has been placing pressure on site owners to adopt HTTPS. The newest versions of Google Chrome show sites as insecure if they do not communicate over HTTPS.

There is, however, still a barrier to entry when it comes to implementing free SSL/TLS certificates by Let's Encrypt. While some hosting control panels and PaaS solutions in the cloud offer UI solutions that make the process of obtaining Let's Encrypt certificates effortless, it's certainly not an easy or straightforward thing to do on a Virtual Machine. I spent quite some time reading resources on the internet, but have never been able to find a complete guide that not only explains how Let's Encrypt works, but how to automate it with Docker and set it up in a secure way. I found lots of scattered resources and ran into more problems than I can recall. In the end, I was never able to find a proper guide and had to resort to figuring it out on my own through trial, error and persistence.

This is the guide that I wish was available when I started this journey. It's my contribution towards lowering the barrier to entry for HTTPS adoption. If there's any suggestions or improvements to be made, which I'm sure there would be, let me know in the comments and I will update accordingly.